History of the Wolverine

U.S.S. Michigan was the first iron-hulled warship in the U.S. Navy and the first of her kind on the Great Lakes. Built in Pittsburgh and re-assembled in Erie, she was 167 feet long, displaced 450 tons, and was powered by side-paddlers and sails. Michigan provided a formidable and grand naval presence on the Great Lakes.

After the War of 1812, many Americans had continued to distrust British intentions in Canada and argued for continued military protection of the U.S. northern border. With the British sympathetic towards the Confederacy during the U.S. Civil War, those fears worsened. During the Civil War, U.S.S. Michigan guarded a prison camp for Confederate soldiers on Johnson’s Island, near Sandusky, Ohio. At one point, the Confederacy planned to capture Michigan and launch an attack on the Union from the north. The captain and the crew of Michigan discovered and foiled the plan. 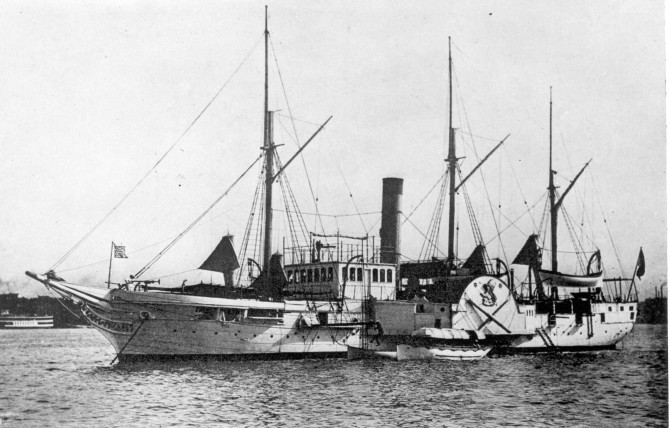 In 1905, she was renamed U.S.S. Wolverine when a new battleship was commissioned as U.S.S. Michigan. During the 1913 Centenary commemoration of the Battle of Lake Erie, the Wolverine had the honor of towing the reconstructed Niagara around the Great Lakes in a grand patriotic celebration.

Despite the earlier personal pleas of President and former Navy man Franklin Delano Roosevelt, the U.S.S. Wolverine was scrapped in 1949 when local efforts to save her finally exhausted. Her prow, displayed but exposed to the weather on State Street in Erie, was saved from the scrapman’s torch.

On February 26th 1998, the prow was moved to its new home on the First Mezzanine Level of the Erie Maritime Museum. The prow underwent an extensive restoration that included welding, scraping, painting, and refitting of her scrollwork. The Wolverine exhibit is certain to be popular with Erie residents, naval enthusiasts, and historians.